Celebrate the onset of National Aboriginal History Month
with the compelling text with First Nation, Métis or Inuit content
that has won
the 2012 First Nation Communities Read program.

The winner of the 2012 First Nation Communities Read
program,  as selected by the First Nations public library communities of Ontario, is .  .  .

Shannen and the Dream for a School
by Janet Wilson 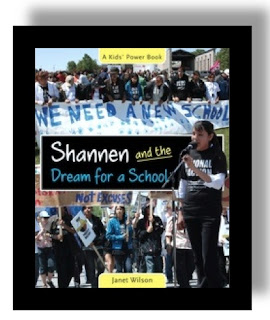 This non-fiction text by award-winning author and illustrator Janet Wilson tells the story of thirteen-year-old Shannen Koostachin who in 2007 began her fight to have a new school built in her Cree community of Attawapiskat in northern Ontario.  Since 1979, when the school was contaminated after a fuel oil spill, the community of Attawapiskat had been using temporary portables lacking heat and susceptible to mould as a school.  Shannen and fellow students began the Students-Helping-Students campaign that included a YouTube video, visits to Ottawa, Facebook pleas and letter-writing, and became the largest child rights movement in Canadian history.

The following PowerPoint presentation, uploaded from YouTube, was produced by Shannen and her fellow students as a plea to Minister Chuck Strahl for a new school.
Uploaded by BrendaBozlo on Mar 23, 2008 to YouTube.

This documentary short, also uploaded from YouTube, covers Shannen's story in full as told by HeartSpeakTV.
Uploaded by HeartspeakTV on Jan 23, 2011 to YouTube

Do yourself a favour and read Janet Wilson's Shannen and the Dream for a School for a compassionate and informative read about a poignant story of a community's quest for social justice.
Posted by Helen K at 14:24