For readers of crime, mystery, espionage and all manner of criminal doings, both fictional and factual, the Arthur Ellis Awards for Excellence in Canadian Crime Writing are the awards to check out for the newest and the best. (A bit of trivia: The awards are named for the pseudonym of the Official Executioner for the Dominion of Canada from 1913-1935, which explains the appearance of the award as seen to the right.)  Awarded annually by the Crime Writers of Canada since 1984, the Arthur Ellis Awards include the following categories:

*Awards for which prizes are provided

On the evening of May 31, 2012, Canada's crime writers attended the Arthur Ellis Awards Banquet in Toronto, some leaving with their own wooden statuette of a hanging man (whose arms and legs flail when the string is pulled), including the author of the Best Juvenile/Young Adult Crime Book. 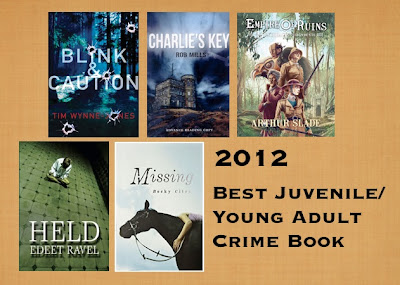 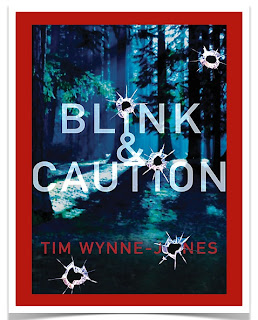 Blink left his mother and abusive stepfather for a life on the streets, and Caution took to the streets after the accidental shooting death of her cherished older brother. When Caution decides take off on her drug-dealer boyfriend, her life collides with Blink's in less than conventional circumstances. CanLit for LittleCanadians reviewed it here.

As an aside (okay, more like its own paragraph), the origin of the statuette's design has an interesting connection to children's literature.  Children's and YA author, Tim Wynne-Jones, winner of this year's Arthur Ellis Award for Best Juvenile/Young Adult Crime Book for Blink and Caution (Candlewick, 2011), apparently had a role in its design.  However,  Tim Wynne-Jones, who became an officer of the Order of Canada in December of 2011, humbly explains his role in this note on the Crime Writers of Canada website.

A note on Arthur by Tim Wynne-Jones
I'm happy to clarify Arthur's history. It was my job to head the committee, as Tony said. And my big contribution, as far as I'm concerned, was in realizing that a book prize is kind of a stage prop. The darn thing should look good in somebody's hands as well as on their mantel. So I thought to go to a stage designer, Peter Blais, who happened also to be a wonderful actor, and who happened to be someone I had acted with and knew to have a wicked sense of humour. He got it! He understood what I was trying to say and came up with the jumping jack. So Peter very much deserves the kudos for Arthur and I'm just pleased to have got him on board. It's the best prize around, as far as I'm concerned. I'm lucky enough to have won one and also to have won an Edgar and Arthur beats Edgar all to heck!  (Retrieved from http://www.crimewriterscanada.com/awards/arthur-ellis-awards/history on April 19, 2012.)