2015 Sunburst Award for Excellence in Canadian Literature of the Fantastic: winners announced!

Yesterday the Sunburst Award Society announced the winners for its two categories of Sunburst Awards for Excellence in Canadian Literature of the Fantastic selected from its shortlists published at http://www.sunburstaward.org/2015-sunburst-shortlists)

These awards, presented annually in the categories of Adult and Young Adult speculative fiction, aim to recognize the novels or book-length collections of Canadian writers (citizens or landed immigrants) of fantasy, with a cash award and a Sunburst medallion.


This year's
WINNER
in the Young Adult category
is 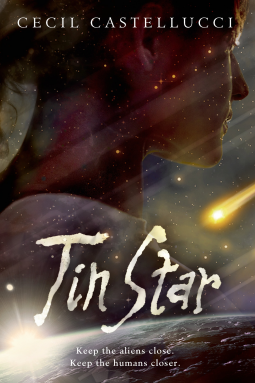 
This is what the jury for the Sunburst Award had to say about Tin Star and author Cecil Castellucci:


Tin Star is a gritty, compact science fiction novel that travels far beyond the usual orphan tropes of much young adult fiction. Tula is a teenaged girl overwrought with thoughts of revenge after her parents are murdered. Left behind on a shabby space station populated with all manner of alien life, Tula must learn to fend for herself if she is to survive. Castellucci handles notions of cultural difference with a deft hand, moving Tin Star beyond the sort of human-centeredness typical of traditional space operas. The spare prose paints a vivid picture of Tula's struggles between her desire for vengeance and her yearning for a life beyond grief, and her refusal to view human manners as a default form of "normal" is reminiscent of the best of science-fiction such as Ursula Le Guin's The Left Hand of Darkness. A powerful, melancholy, and ultimately surprising work, Tin Star is a coming-of-age tale that will resonate with any reader with a pulse.

Cecil Castellucci is the author of young adult books and graphic novels including Boy Proof; The Plain Janes; First Day on Earth; The Year of the Beasts; Stone in the Sky and the Eisner nominated Odd Duck. Castellucci is the Children’s Correspondence Coordinator for The Rumpus, a two time MacDowell Fellow, and the founding YA Editor at the LA Review of Books. She lives in Los Angeles.