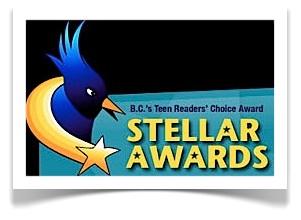 From last November to this April, BC teens (ages 13-19) have been reading, reviewing and discussing their reading at school and public libraries, all with the aim of selecting a winner of the Stellar Book Award. The Stellar Award is British Columbia's Teen Readers' Choice Award, and somehow I missed posting the nominees when they came out last year.  As teens are currently voting until July 31, I thought I might as well post this list of nominees, ready for the announcement of the winner in August.

Getting Over Garrett Delaney
by Abby MacDonald
Candlewick Press

The Opposite of Tidy
by Carrie Mac
Razorbill