In 2011, the Canadian Broadcasting Corporation (CBC) introduced the CBC Bookie Awards as an opportunity for readers to choose their favourite Canadian reads published the previous year.  Based on the selections of the well-read CBC personnel from CBC Books, Canada Reads, Writers & Company, The Next Chapter, as well as recommendations from the public, five titles in each of ten categories are nominated.  Readers then have several weeks to cast their votes online (only once per category per day).  Winners are announced the following week, in April.

The ten categories, which include two international ones, for which books are nominated are:
This year's CBC Bookies Awards nominees were announced March 8, 2012 with voting taking place online before 11:59 p.m. ET of Saturday, March 31.  The winners will be announced at a CBC Twitter Chat (#CanLit) on Thursday, April 5.

The one category relevant to CanLit for LittleCanadians is the Young Adult category.  The finalists for this category are:

This Dark Endeavour: The Apprenticeship of Victor Frankenstein
by Kenneth Oppel
HarperCollins Canada

Use this CBC Bookies link to cast your vote(s) for your favourites in the Young Adult category, but only until the end of March 31, 2012.  (The ballot below is as it appears on the CBC Bookies website) 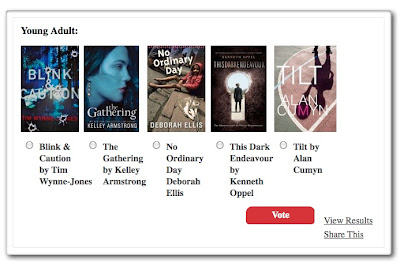