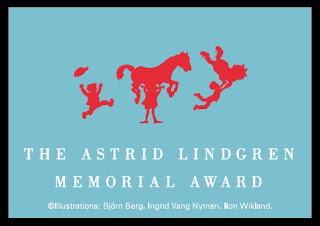 The Astrid Lindgren Memorial Award (named for the beloved author of Pippi Longstocking) is the world's largest prize (SEK 5 million; well over $750 000 US)  for children's and young adult literature.  Even more mind-boggling is the fact that the Swedish government fully funds this award which is administered by the Swedish Arts Council.

The 2012 Award recipient(s) will be announced on March 20, 2012 at Vimmerby, Sweden (birthplace of Lindgren) and broadcast at the Bologna Children's Book Fair and at www.alma.se

Congratulations to Brian Doyle, Jean Little and Michel Noël for being nominated as Canada's 2012 children's author candidates for this extraordinary award.

The winner of the 2011 Astrid Lindgren Memorial Award was Shaun Tan of Australia.
Posted by Helen K at 16:56