The prestigious Vicky Metcalf Award for Children's Literature, an annual $20,000 prize awarded to an outstanding author of a body of work in children's literature, was presented November 3, 2015 at the Writers' Trust Awards event at the Glen Gould Studio in Toronto.

Administered by the Writers' Trust of Canada since 2002 and sponsored by the Metcalf Foundation, the Vicky Metcalf Award is the only one of the six that goes to a writer of children's literature.

Now I'm pleased to announce that

of the Vicky Metcalf Award for Literature for Young People

whose non-fiction repertoire has entertained and educated children for almost thirty years.  Among her finest books are the following award-winning and -nominated titles, including her two most recent which I've reviewed on CanLit for LittleCanadians: 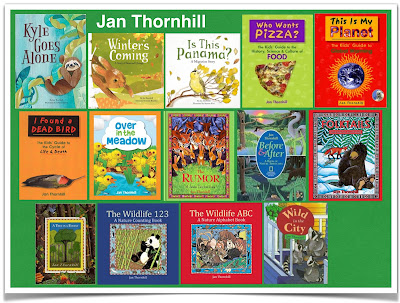 Is This Panama? A Migration Story
Owlkids
2013

Who Wants Pizza?: The Kids' Guide to the History, Science and Culture of Food
Maple Tree Press
2010

This is My Planet: The Kids' Guide to Global Warming
Maple Tree Press
2007

I Found a Dead Bird: A Kids' Guide to the Cycle of Life and Death
Maple Tree Press
2006

Over in the Meadow
Maple Tree Press
2004

The Rumor: A Jakata Tale from India
Owlkids
2005

Before & After: A Book of Nature Timescapes
National Geographic Children's Books
1997

Folktails: Animal Legends From Around the World
Maple Tree Press
1993

A Tree in the Forest
Maple Tree Press
1991


Check out Jan Thornhill's website at http://www.janthornhill.com  to read more about her books, life and other details.
Posted by Helen K at 16:48