The Sunburst Award Society recently announced the shortlists for its two categories of Sunburst Awards for Excellence in Canadian Literature of the Fantastic. 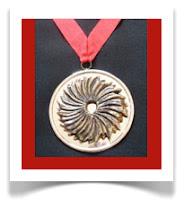 These awards, presented annually in the categories of Adult and Young Adult speculative fiction, aim to recognize the novels or book-length collections of Canadian writers (citizens or landed immigrants) of fantasy, with a cash award of $1000 (Can) and a Sunburst medallion.

Phyllis Gotlieb (1926-2009), one of the first published authors of contemporary Canadian science fiction, has been honoured with the naming of this award after her first novel, Sunburst, published in 1964 by Gold Medal.

The winners of the awards will be announced and presented in the fall in Toronto.  While there are only 5 titles nominated on each short-list (only the young adult list is shared here), the Sunburst Award site has lists of speculative fiction from different years.  It's a key website to find your next great CanLit fantasy read.

Reviewed on April 14, 2013 at CanLit for LittleCanadians.

Reviewed November 24, 2012 at CanLit for LittleCanadians.